For the last 10 years, nearly every week of my life, I have spent a half day caring for women with cancer who come to see me with concerns about their sexual function. Nearly a third of patients come not because anyone referred them but because they saw a poster in a hallway of the Center for Advanced Medicine or a brochure on the coffee table in the Breast Center at the University of Chicago medical center. About half of my patients come from a doctor or hospital other than the University of Chicago, where I work. 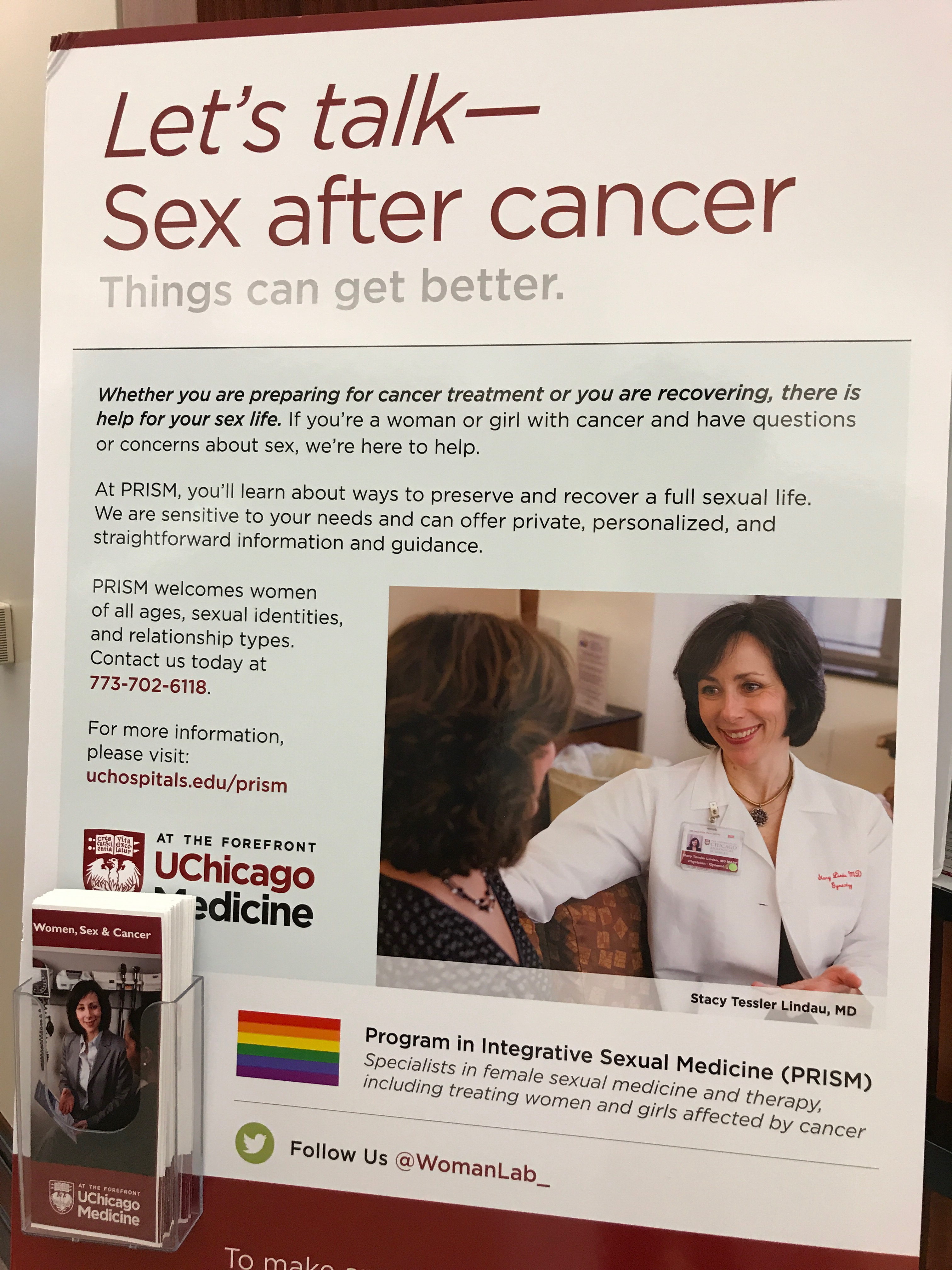 About half of my patients at the Program in Integrative Sexual Medicine have breast cancer. The other half include about equal numbers of women with a gynecologic cancer (like uterine, cervical, vaginal, vulvar and ovarian cancer), colorectal cancer, leukemia and lymphoma and even head and neck cancers. Most of my patients agree to participate in our “Registry.” By participating in the Registry, patients give us permission to track information about the problems that led them to see us and how they do in our care. From the words of patients who participate in the Registry, here are several common descriptions of things their doctors have said (or haven’t said) about their sexual function concerns: 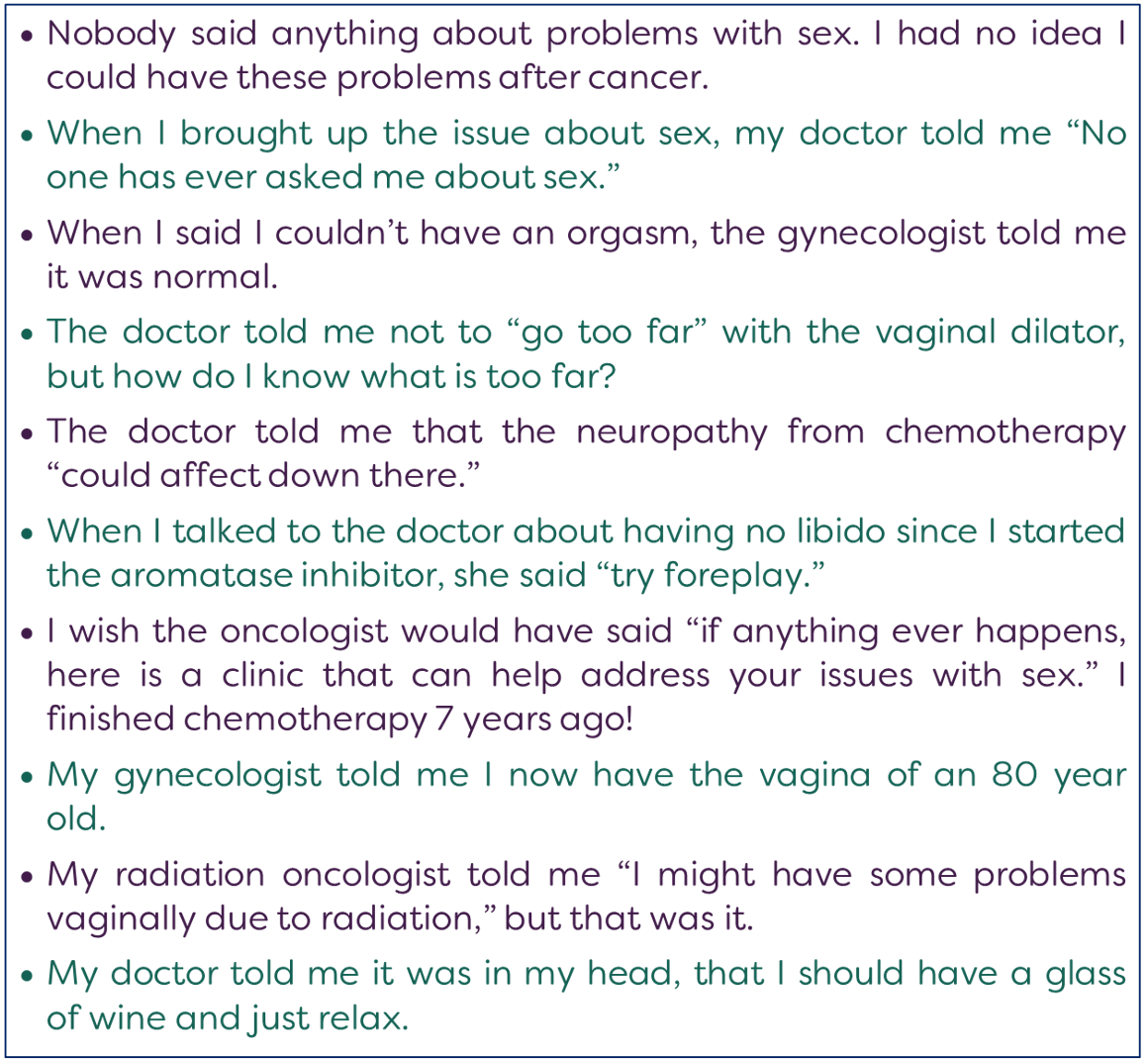 Now, I’m a doctor, too, and I am certain of three things about these statements: 1) women aren’t making this stuff up, 2) if someone followed me around with a tape recorder (remember those?) or a 21st century digital recording device I would say plenty of things in the course of my stressful day that I’d wish I could erase, and 3) doctors, as a general rule, are people who want to be helpful. Most doctors don’t go to four years of medical school and another four years of residency training and two or three more years of fellowship and licensing and auditing and compliance and continuing education and early mornings and late nights and working on the weekends with the plan to hurt women. And yet, sometimes we do. We hurt women with the things we say when they muster up the courage to talk to us about their sexual concerns. We hurt women with the things we don’t say because when we don’t talk to women about the sexual function problems they are likely to encounter after cancer and medical treatments for cancer or other conditions then women think they are alone when the problem happens to them. Women think it’s just their problem and they don’t realize they can get help.

When choosing words to respond to a female patient who raises sexual function concerns, it can be helpful to ask yourself whether you would respond similarly to a man with a similar concern. For example:

Man at a 6 week post-operative visit after having his prostate removed for cancer: “Doc, I can’t have an erection.”

Doctor: “You need to try harder.”

Same man: “My penis really hurts when I have sex. It’s so painful that I’m losing interest in sex altogether. This is not a way to live.”

Doctor: “Did you experience sexual abuse as a child?”

I think most doctors and people in general – male, female or other – can see how ridiculous it would be to talk to a man this way about his sexual function after his prostate cancer treatment. Maybe things used to go down this way, but probably not since 1997 when Republican U.S. Senator Bob Dole, Purple Heart winner, and prostate cancer survivor went on TV during Superbowl XXXIII to promote sildenafil (marketed by Pfizer as Viagra) for the very first time.