Scientists and doctors have been discovering and re-discovering the clitoris for hundreds of years. But even today, there is still so much to learn! Here’s a tour of some interesting things you might not know about this amazing organ.

What is the clitoris? 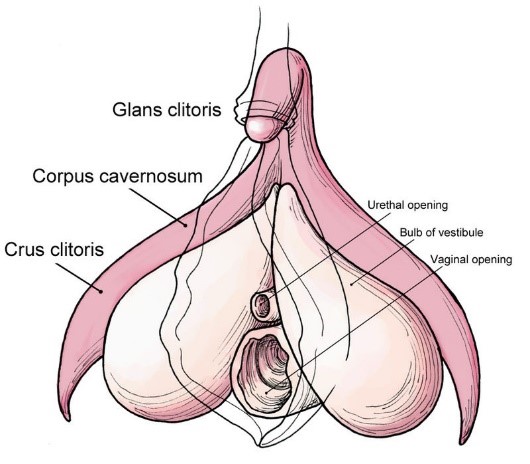 How big is the clitoris? Does size matter?

While much scientific ink has been spilled about the size of the average penis, fewer studies have measured clitoral size. However, authoritative estimates do exist. I affectionately term this collection of scientific literature the “cliterature.” Evidence from the cliterature suggests that the sum of the lengths of clitoral body parts is, on average, 9-11cm. That’s the height of a 12 ounce soda can! In case you were curious, the average length of a flaccid penis is 9 cm, based on a study of 3,300 young Italians. We’ll let you make the comparison.

Interestingly, one study suggests that women with heavier body weight, higher body mass index (BMI) and who have given birth may tend to have a larger clitoral size. Clitoral size does not seem to be associated with height, use of birth control pills, or frequency of sexual activity.

So, there’s an obvious question: does size matter? Evidence from the cliterature is mixed, limited, and intriguing. Basically, no definitive link between clitoral size and increased pleasure has been found. One study found that women who don’t experience orgasm tend to have a smaller clitoris than women who do experience orgasm—but this study included only 10 anorgasmic women. (Inability to have an orgasm is a rare and usually correctable problem, by the way…more on that later). Another study found just the opposite. Women with smaller clitorises experienced more satisfying sexual encounters and had an easier time reaching orgasm than other women. The authors of this study suggest that small clitorises could be more sensitive than larger clitorises. This study was also small, and included only 20 women. Other studies have looked at the distance between the clitoral body and the vaginal canal, positioning of the clitoral body, and other factors to discover whether there is any relationship between clitoral size, position, and pleasure. We aren’t sure what to conclude yet, but hope that this important research continues.

Does the clitoris become erect?

As usual, this got us thinking here at WomanLab. If the clitoris and the penis aren’t so different after all, can women have erectile dysfunction? How widespread is this problem? And if it is widespread, will there one day be ads on TV telling us that female erectile dysfunction is an important public health problem?

If erectile dysfunction is even half as common for the clitoris as it is for the penis, the issue deserves immediate and widespread attention. Women’s sexual function deserves the same rigorous scientific consideration as men’s, even if the clitoris is less visible and less understood by medical science. If clitoral erectile dysfunction is found to be common, I’m ready for television ads featuring a confident, grey-haired woman throwing a football into a tire swing while her young lover looks on, smiling knowingly.

Is the G-spot real?

Let’s conclude this tour with the ultimate gynecological mystery. Does the G-spot exist? Do you have one? As more research has been conducted on the clitoris, including the continued discovery of its complex anatomy, scientists have concluded that, well… There is no unique anatomical structure that correlates with a “G-spot.” Despite decades of speculation, it appears that there is no such thing. But why, then, do women across history report a region of heightened sensitivity on the anterior wall of the vagina, two-to-three inches inside? Reliable research has found that that’s where the body of the clitoris comes together. So, while there may be no anatomical G-spot, in its place is the amazing erectile structure you now know and love, the humble clitoris.